Seven-year-old Alex Park has hyper mobility syndrome, his garden was just too dangerous for him to use. But thanks to the leadership of Wellchild legend project manager Alastair Higginbottom and six incredibly strong willed and determined Salesforce employees, Alex now has the freedom and independence to get out and play in the fresh air and with his parents safe in the knowledge he will be free from danger on his own in the garden.

A crack team of Northern Salesforce employees descended on the sleepy town of Barnsley, South Yorkshire to help Wellchild with a much-needed garden makeover, the garden was on a steep slope and only had access if you could climb a two-foot wall. This on the face of it doesn’t sound that bad but add in a condition known as hyper mobility syndrome and this is an impossible task, especially for a seven-year-old boy.

The team faced the undaunting task of helping to level this garden to make it accessible for Alex and his much loved tricycle. Now on arrival on day one all seemed pretty straight forward, we would start digging and wait for the mechanical digger to arrive and the process would be pretty quick. However after an hour or so it became obvious the digger man had let us down, but most annoyingly let Alex down, the task just became back breaking as we would have to dig the entire garden by hand and barrow it to the roadside.

At the end of day one, with the team looking exhausted, we had filled two skips totaling 29 tonnes, we had so much more to do but had nowhere left to put the soil so we had to stop, earlier than expected. The question remained, would we get it done in time?

When we came back on day 2, minus two of the team, it was back to digging out the garden and leveling the base, another 10 tonnes came out and into the 3rd skip, albeit at a slower pace.

Once we had our new garden base level half the team began boxing in the garden and building the retaining walls and bench, while the other half borrowed 6 tonnes of base material back into the garden for the artificial grass. It was going to be a late one!!!

However with the retaining walls complete, the bench built, the ground now level it was time for the grass to come in. With a lot of knife work, hammers and nails the grass was laid at about 7:30pm, just in time for the big reveal. 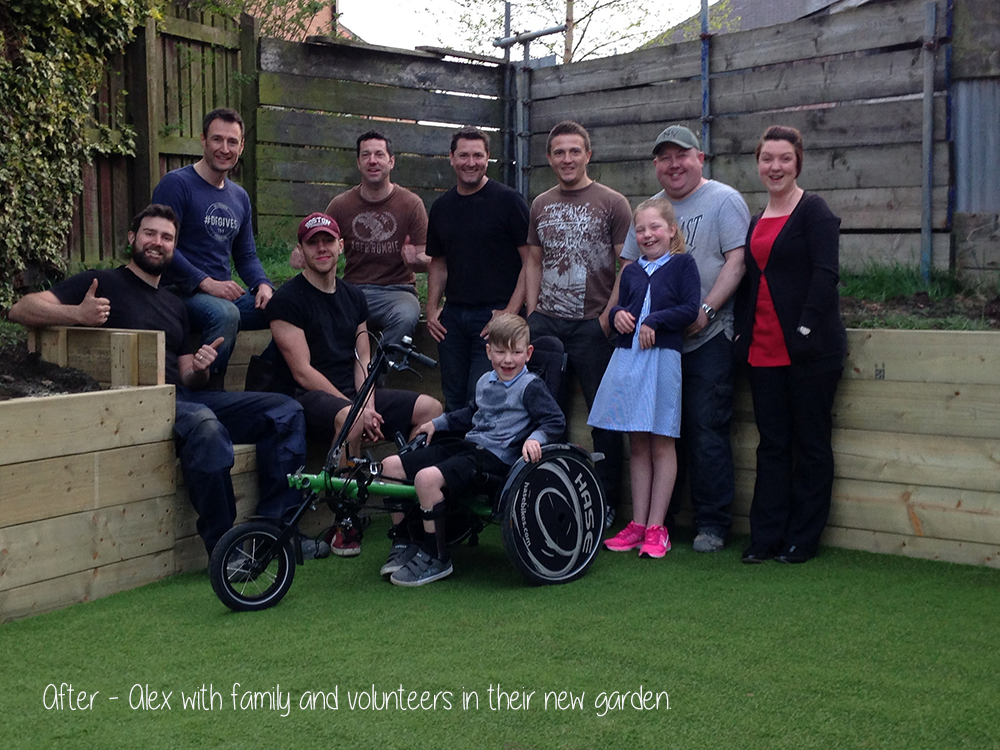 The team had had the pleasure of meeting Alex on day one of the project which only helped drive us all on and complete this mammoth task in time. A big thanks has to go to Alex’s dad as he worked tirelessly throughout to get this done, plus for the endless cups of coffee and one of the most impressive biscuit tins we had ever seen.

The team had the pleasure of the seeing the whole family at the end for the big reveal and seeing them all in tears, led by Alex’s mum and sister, only went to emphasize how much this makeover will change all their lives. None more so than Alex who has the freedom and independence to get out and play in the fresh air with his parents safe in the knowledge he will be free from danger on his own in the garden.

Our backs will never forget!!!!!