This post is about the Salesforce Foundation’s Nonprofit Starter Pack Community Sprint that took place in Seattle 10/23-10/24. Ryan Ozimek, Co-founder and CEO of PICnet, was one of the organizers and facilitators of the event. Cross-posted from LinkedIn.

By: Ryan Ozimek, Co-founder and CEO of PICnet

At the end of October, we wrapped up the Nonprofit Starter Pack Fall 2015 Community Sprint in Seattle. As would be expected from an event like this, we ended up at a great bar in downtown, reminiscing about where we’ve been and where we’re going. For those of you in the Salesforce.com community, you’ve heard of the Opportunity object. It’s the place you track the potential value of a, well, opportunity. A chance to do a project, win a deal, execute an agreement.

During the community sprint, the Nonprofit Starter Pack community has moved from the stage “Value Proposition” to “Perception Analysis”.

It’s been incredible to watch this community self-organize. In 2014, there were concerns that the open source Nonprofit Starter Pack may not have the same energy as in past. I know some organizations wondered about deploying an open source solution on a closed platform.

Things changed a year ago.

A cadre of folks came together at Dreamforce 2014 to make it clear that they were eager and willing to keep supporting alongside the Foundation the organizations that believed in the power of open source software. Their efforts sparked the flame for the January 2015 community summit at the Soapbox Engage offices in DC, and then this week’s community sprint in Seattle.

This spark has turned into a bonfire of awesomeness. 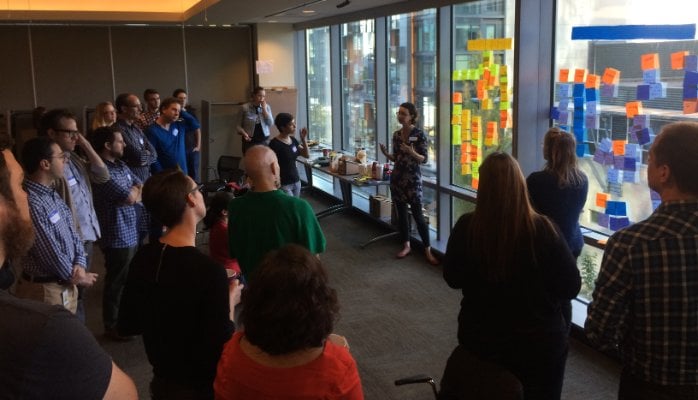 As with the success of most open source projects, the Nonprofit Starter Pack’s recent community contributor revival is a combination of many inputs.

Engaged evangelists’ contributions of time and resources to documentation, code, and community building

Great software that appeals to average users and power admins

But there’s something even more fundamental than all these items put together which drives this community forward. As we came to closing circle, and shared our gratitude, it was clear that the room was full of empowered contributors. 58 people that believe in the opportunity that presents itself when great software meets raw passion, and who believe in the mission of our software.

This sprint was different than any other open source event I’ve attended or facilitated. It was personal. It displayed the potential that can be realized when a group of people give selflessly for the greater good and direct their energy towards solutions that can scale. I’m just glad I got through my final reportback.

With two big open source community sprints wins in 2015, it’s clear that the Nonprofit Starter Pack is moving into the next chapter of its rich history. As we said in closing circle, we honor our past as we prepare for an incredibly bright future. Together, as a coalition of Foundation, partners, and users, we build the next generation of our software and community.

From spark to bonfire. From Value Proposition to Perception Analysis. The future, my friends, is bright. Onwards!

Join the Salesforce Foundation for the latest NPSP updates in a free webinar, Nonprofit Starter Pack: Overview and Newest Features on Thursday, November 5 at 2:00pm EST / 11:00am PST. Register today!

During Black History Month, Salesforce is shining a light on some of our nonprofit customers who support and work with…

Find out how CDP is redefining what it means to be a donor-centric NGO.

Celebrate Dr. Martin Luther King, Jr. Day this year with these resources on being an equality ally for racial justice.