By: Mary Pustejovsky and Andrea Schiller

Before we tell you about them, a little background on this product that tens of thousands of nonprofits in over 80 countries are using everyday.

Designed for nonprofits of all sizes, the NPSP has undergone tremendous development in the past decade to become the most widely used nonprofit Salesforce application.

It all started in 2008, when Salesforce.org (then the Salesforce Foundation) collaborated with the nonprofit Salesforce community and launched the open source NPSP with the goal of providing a way for customers to configure Salesfore out-of-the-box for nonprofit organizations. NPSP began as 5 separately-installed managed packages that provided Salesforce with constituent management, relationships, affiliations and fundraising capabilities. In late 2013, Salesforce.org reimagined NPSP, with community collaboration and contribution top of mind, and launched NPSP 3.0.

Since then, NPSP has grown to be much more than just a starter pack. It has developed into an-easy-to-use fundraising and constituent management application used by tens of thousands of nonprofits.

In partnership with the Salesforce.org community, NPSP is built specifically for the needs of nonprofits. By harnessing the best minds in the nonprofit community and making use of collaboration on the Power of Us HUB NPSP Group, which boasts over 10,000 users, Salesforce.org is able to leverage an actively engaged community to deliver what is most needed in the NGO space. In addition to the Power of Us Hub and local user groups, Salesforce.org collaborates with the Community for in-person events, known as Sprints, where community members build out functionality or add to the knowledge base. The most recent Community Sprint was held on March 21st at the United Way Bay Area HQ, with over 50 community members contributing code and documentation.

With a robust product and community comes a robust release plan. Instead of relying on individual organizations to manage their own AppExchange upgrades, Salesforce.org pushes automatic upgrades to organizations on NPSP 3.0 or higher every two weeks. With that cadence, we know that staying current with the latest and greatest can be hard, so every few months we’ll let you know about the not-to-be-missed NPSP features. In the NPSP Spring ‘16 Releases, those include:

In addition to these features, other notable features include Honor/Memorial and In-Kind gifts. With Honor/Memorials, Opportunities can be marked in honor or in memoriam of someone and you can keep track of the people besides the donor involved with those gifts, such as the person who should be notified that a gift was made in memory of their deceased loved one. And with In-Kind gifts, donations of goods or services are tracked with their own record type and custom fields so nonprofits can properly manage all types of giving. 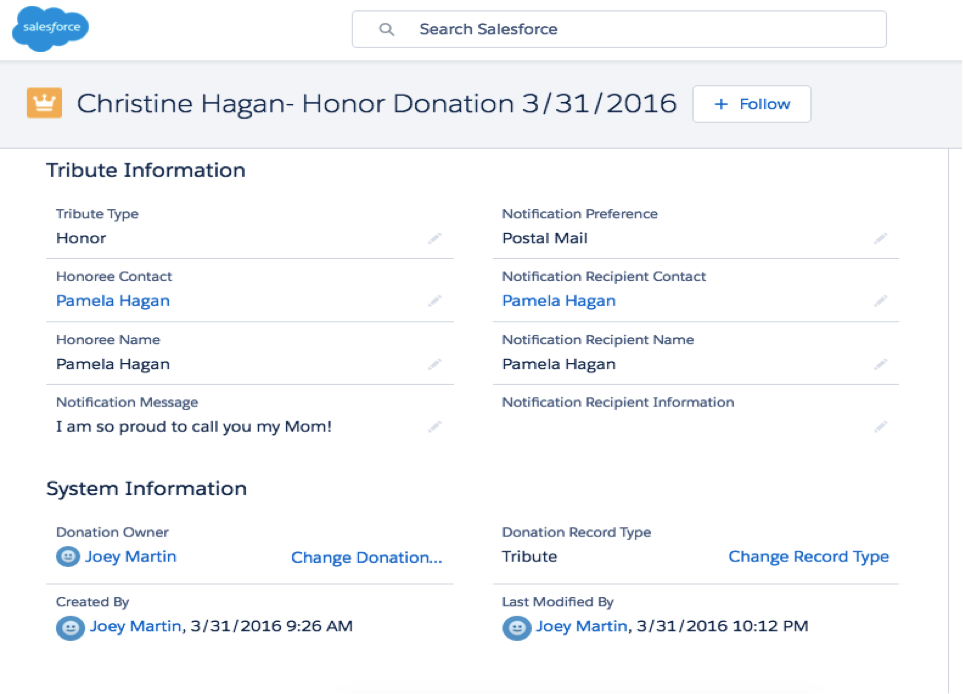 Each year, as we observe the International Day for the Abolition of Slavery on December 2, we have an opportunity…

Higher Education How (RED) is Fighting AIDS and Saving Lives

A conversation with Jennifer Lotito, the President and COO of (RED), to learn more about (RED)’s success model and how…

Raise more funding for your nonprofit this giving season with strategic matching gift practices. Keep an eye out for these…