We’re hoping to hear a lot of talking, reading, and singing around the plaza at next week’s annual Dreamforce conference. That’s because Too Small to Fail — a joint initiative between Next Generation and the Bill, Hillary, and Chelsea Clinton Foundation — has launched an innovative new campaign to help prepare Oakland’s youngest children for success. What’s more, thousands of Dreamforce volunteers are going to help make it happen. Our message is simple: “Talking is Teaching: Talk, Read, Sing.”

Help support early childhood development by joining us in assembling 2,000 packages of education materials for children at local hospitals on Tuesday, October 14
from 11:30 am – 4 pm on The Dreamforce Plaza. 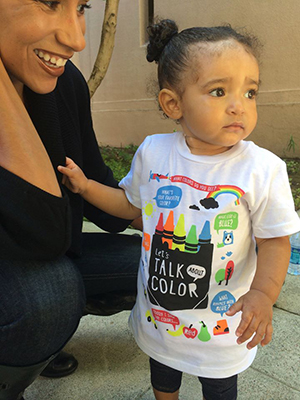 We know that children’s brains develop at a dramatic pace during their earliest years. In fact, eighty percent of brain development happens by the age of three. Just as a baby’s eyes light up at the sound of her mother’s voice, her brain is lighting up too. Seven hundred neurons make new connections every second as she learns about the world around her. Every word spoken to her, every song sung, every book read to her from birth helps her brain make new connections and builds the foundation for later learning.

The good news is that if parents and caregivers engage in simple actions – like talking, reading and singing with their young children daily – they can make an enormous impact on their child’s development. Parents can incorporate these activities into everyday routines, such as pointing to and talking about things they see on a walk to the bus stop, or explaining the steps involved in making dinner, or singing a song together while giving their child a bath. Too Small to Fail aims to better equip parents with this knowledge and the tools to succeed as their children’s first teachers.

Our Plan in Oakland

While Too Small to Fail is a national initiative, we are thrilled to be rolling out a local campaign here at home in the Bay Area. With the generous support of Lynne and Marc Benioff, and many local partners such as the Bay Area Council and UPS, we are working to create a model program in Oakland for how children’s hospitals can actively address the “word gap” as a public health issue. Our campaign will meet parents where they are, and we are working with doctors and hospital staff at UCSF Benioff Children’s Hospital Oakland and Kaiser Permanente Oakland to share these important messages with the families who visit these hospitals and their clinics. 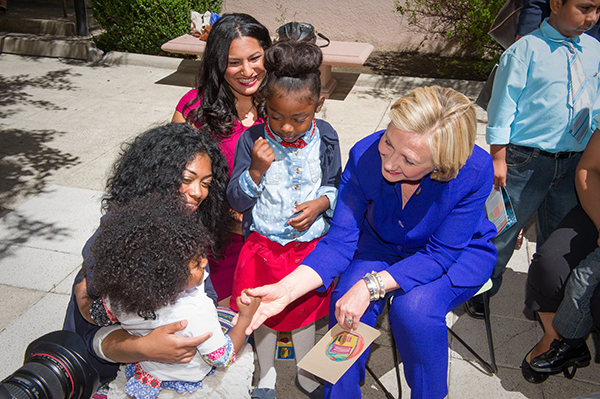 In focus groups we conducted last year, we learned that Oakland parents know that it’s important to build their baby’s vocabulary but don’t necessarily understand the impact their daily actions have on this development. Also, many of them asked for more tips and frequent reminders about engaging in these activities. So, we’ve worked with local and national experts to create the following tools to help meet these needs: 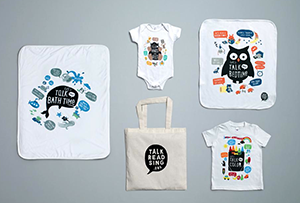 Starting in the fall of 2014, Oakland parents and caregivers will leave their pediatrician’s offices or hospitals with tote bags full of helpful materials for them to take home and use. Thousands of Dreamforce attendees will be asked to help assemble the contents of the totes next week, that include baby clothing and blankets developed by marketing giant Goodby Silverstein, with age-appropriate prompts to talk, read, and sing. For example, when a mom is changing her infant’s diaper, her baby’s onesie will remind her to “talk about hands and feet.” The bag will also include a family resource guide and CD created by Sesame Street, a book donated by Scholastic, and information on how to receive regular text reminders from Text4baby about the importance of talking, reading and singing to their young children.

When parents arrive at Children’s Hospital Oakland for check-ups, they will see creative and family-friendly signs in the lobby, waiting room, and exam room that remind them to talk, read, and sing with their children. Then, with the help of messages in a pediatrician’s toolkit developed by the American Academy of Pediatrics, their pediatricians will explain the importance of early brain development as they give them the tote bag full of tools.

These messages will also be on billboards and bus shelters around the hospital and surrounding community, to remind parents to describe objects during a walk or bus ride, sing songs, or tell stories to improve their baby’s vocabulary. It is an empowering message: parents have the ability to build their children’s vocabulary and set them up for growth and success.

We are thrilled to be a part of this year’s conference and are so excited to meet the thousands of Dreamforce attendees who will help us put together these tote bags and help prepare Oakland kids for success in school and in life. We hope you will join us in assembling kits for children on Tuesday from 11:30 am – 4 pm on The Dreamforce Plaza!

For more ways to give back throughout Dreamforce, visit DFGives.org.

James Steyer is Founder and Chief Executive Officer of Common Sense Media, the nation’s leading nonpartisan organization dedicated to improving media and technology choices for kids and families, as well as the Co-Founder and Chairman of the Center for the Next Generation. Jim is a Consulting Professor for Stanford University and also authored Talking Back to Facebook and The Other Parent: The Inside Story of the Media’s Effect on our Children. Read more from Steyer’s full bio.

Ann O’Leary directs the Children and Families Program at Next Generation, which includes spearheading Too Small to Fail—Next Generation’s joint initiative with the Clinton Foundation to help parents and businesses take meaningful actions to improve the health and well-being of children ages zero to five — developing a national research portfolio, and leading policy activities in California. Ann also serves as a Senior Fellow at the Center for American Progress where she writes about work-family policies. Read more from O’Leary’s full bio.

Learn more about the exciting product announcements from the education and nonprofit keynotes at Dreamforce 2022.