Dreamforce Book Drive: Paying it Forward By Giving Back 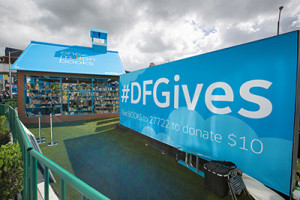 During Dreamforce ’15 I had the honor of interviewing Lilly Krenn, director of volunteer services at UCSF Benioff Children’s Hospital Oakland, about the Dreamforce book drive. Kicked off in August at Presidio Middle School in San Francisco, the drive sought to engage employees, Dreamforce attendees, and the greater community to raise one million books. When Lilly and I talked in front of the Salesforce LIVE cameras, the drive had raised roughly 850,000 books. By the time the drive wrapped up on September 18, we’d gathered 1,008,122 books to donate. The ways in which Dreamforce gives back are amazing.

Here’s a cool offshoot of the book drive that you may not have thought about: Raising all those books also benefitted the local economy.

Before meeting Lilly at the Dreampark to talk about the book drive and the phenomenal work her team of volunteers does everyday for the kids and families at children’s Oakland, I did a little shopping. The SF LIVE crew wanted to contribute to the million books cause, so I stopped into Alexander Book Co., an independent bookseller located on second street in San Francisco, about two blocks from our 50 Fremont office.

There are many excellent bookstores in San Francisco, and throughout the Bay Area, and I don’t mean to endorse one over the others. But I will say that from the selection to the friendliness of the staff and owner herself, Alexander Book Co. provided me with an awesome shopping experience. I loaded up my basket with books for the drive — including many I’d recently enjoyed reading with my own two sons — and learned that I was far from the only person to have bought books for the drive that week.

This is the beauty of the Salesforce philosophy of making the world a better place through business. Salesforce’s 1-1-1 philanthropy model makes things like the one million books drive possible. The proceeds from the book drive directly benefit great organizations like Children’s Oakland, Presidio Middle School, and the many other organizations the books were distributed to. Along the way, individuals are inspired to get involved, and many of those on site at Dreamforce headed to nearby bookstores to pick up a few volumes to donate. In turn, the local economy prospers thanks to the business.

And as a purely selfish fringe benefit, I now have a new place to hang out during my lunch hour. Fun fact: One of the guys who works at Alexander Book Co. once racked up an astonishing 142 free pints at pub trivia.

The books I gave to Lilly on camera weren’t my only purchases at Alexander Co. that week. I attended a killer Dreamforce session entitled, The Future Seen Through the Eyes of a Science-Fiction Writer. Salesforce’s Chief Futurist and SVP of Strategic Planning Peter Schwartz spoke with award-winning authors David Brin and Ramez Naam about the future. The talk was awesome (go watch it for yourself via that link!), and it inspired me to read.

So on Friday of Dreamforce after the conference had closed down, I stopped back into the bookstore and picked up a copy of Ramez Naam’s novel, Nexus. I literally haven’t put it down since, and highly recommend it to Sci-Fi fans – or anyone else interested in what amazing things may lie ahead of us all over the next few decades.

Donating books to kids, supporting the local economy, discovering new authors, and spreading the word – it’s all part of what I now think of as paying it forward by giving back. That’s how business helps make our world a better place to live.

Learn more about the exciting product announcements from the education and nonprofit keynotes at Dreamforce 2022.

Comic Relief US shares four key takeaways for organizational transformation after reviewing its own strategy and approach to grantmaking.